I learned of Condor while attending the 2010 SSA Convention when I saw a never-ending line of attendees waiting for a chance to try it. As I stood aside and watched I was taken by the enthusiasm it evoked. I bought a copy on CD for our club for $60, as I recall. I took it back and we bought a computer and the required accessories. Some members enjoyed it off and on until it finally languished in the corner of the clubhouse, never to be used again. It was a time when Condor Corner became a staple in the SSA Magazine and I read that monthly column wishing I had the time to explore it more. The stories of racing alone were amazing!

Simulator a big hit with our pilots

Fast forward to late spring 2019 when the SSA magazine had an article on how the Air Force Academy is using the Mach 0.1 sim in their training program. Reading that column, hearing of their success and seeing just what it offered in the way of a cockpit lit my imagination and spurred a group of us to acquire one for the club. Another member spec’d out a computer and we were in business. Getting it mid-season did not allow us to fully utilize it for training (not really enough time to get to know it fully) but it was a hit among the rated pilots, for sure, right away. One member flew it for an hour and came out from under the virtual reality (VR) headgear wondering why he owned a glider; it was that much fun.

In the summer of 2019, I got my CFIG as a way to give back to the club (never enough instructors, right?). As I am approaching retirement in late 2021, I already have more free time so it was the natural thing to do in my mind. While I was beginning to get used to instructing (it is my first instructor rating), I kept thinking on how to use the sim to enhance the experience of our students.

Using it for Instruction

In my 40-year career of general aviation and airline flying I have used many different forms of sims from ground-based procedure-trainers to full motion 3-axis ones. As I reflected on what I experienced at work I recalled that they could place you on final for another approach, freeze it while we talked and that the general repetition of it helped to ingrain familiarity and comfort with procedures.

2020 brought the soaring community a season of change in the way we operate when COVID 19 entered. Just as our club (Memphis Soaring Society in eastern Arkansas) was laying plans for its annual safety meeting, we began to hear growing concerns about the looming pandemic. As time went by our club experienced a bit higher number of folks wanting to join and learn how to fly as well as once stagnant members ready to reengage. While they did not mention boredom from having their lives sidelined by COVID they came all the same and were of a wide variety of ages.

Having to not work due to the greatly diminished demand for air travel allowed me to meet some of the demand by spreading out the training from mostly just weekends to two or three weekdays as well. A typical day is an hour or so of ground school, taking turns in the simulator and then going flying. It was a bonus for the club as we would have a tow pilot on a weekday that we typically would not.

As the season settled in more, I began using the sim even more in my teaching by using the training module that can be added to the Condor2 program. These simulator lessons are available from gliderbooks.com, the same folks who market the Mach 0.1 sim as well as a curriculum tailored to the lessons. It has dozens of lessons/scenarios that allows one to practice and perform any number of maneuvers without having to take off first; it simply places you in the air at the prescribed place.

My use with Students as a CFIG 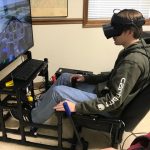 I start new students off without the VR gear, just using the large-screen TV to introduce them to the concepts of a sight picture and trimming before going out for their actual lesson. As they progress, we add the VR gear so they can fly patterns and look around for reference, for example. The instructor sees on the TV what the student sees in the headset. In fact, I pretty much use the sim for introducing students to every aspect of their training before an actual flight. They then have the advantage of having seen what we will be doing and usually perform at a higher level.

I have found that if they cannot do it in the sim, they are less likely to do so in the glider and it is a better use of time and money to work at it in the sim in a controlled environment. Additionally, just like at work, the observer in the back of the sim is in the “smart” seat. Those “observing” see things the pilot (who is under more pressure) at times does not and learns from that observation. When it is their turn in the sim they come with a better-informed mindset and do better sooner.

So, I am a big fan of Condor2 and the Mach 0.1 sim as are many of my students. I use it to see where they are before we go flying and they use it sharpen their skills somewhat removed from the pressures of time and the elements (it is often around 90 and quite humid in the summer at our club).

We all like to know when things are working and I recall one instance that really told me it is. I had a student who was struggling with making precision landings. You know, where you hit an aim point on speed at half spoilers, level off right above the ground and land in a zone down field. He did OK in the sim so we went out to fly. Well, he was shallowing out his descent too soon and arrived with insufficient speed which ended up with him simply landing not far past the aim point. I asked him to hit the sim and practice some more while I moved on to the next student. There is a precision landing module that has virtual poles marking the aim point and landing zone; it starts you out on final approach.

On our next lesson we tried those landings again and he nailed it. I remarked how great that was and asked him what he thought happened (Forgetting I had asked him to practice in the sim) and he said he kept working on it in the sim. Validation had arrived! I could go on as my experience has been full of such stories. Whether practicing landouts (I get them to tow to altitude, release, pick a field and do a full pattern to a minimum energy landing) , forward slips to a landing or any great number of flying skills, we can do so in an environment with the ability to pause, discuss what is going on, and then continue.

The sim is pretty robust in its construction and we have had no trouble with it but for the occasional setting needing tweaking (it helps to have some tech-savvy members around to some extent). We do not charge for it nor do we restrict it in any manner. I usually start it upon arrival at the club so it is ready to go for whomever may decide to fly it. Although it is not loggable time I do feel it pays dividends in keeping students engaged and allows for a productive way to spend time before and after their lesson.

About Mark Olinger 1 Article
Mark began flying gliders in 1972 and is an instructor with the Memphis Soaring Society, located at its home airport, Lawrence Field (4AR5) in Cherry Valley, Arkansas.